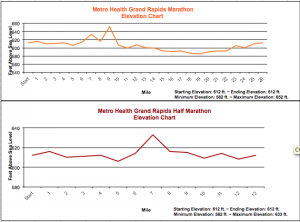 Our downtown loop crosses the historic Sixth Street Bridge for a beautiful view of downtown Grand Rapids along the river. We’ll run past the convention center, the Amway Grand Plaza and within only a couple hundred yards of the final resting place of Gerald R. Ford. After our brief downtown tour, we’ll head out of town toward Millennium Park for a West Michigan color tour. In Millennium Park, we’ll take advantage of some of the newly built paved paths, through the “Enchanted Forest” and between some beautiful lakes. You’ll love the new stuff.  Then, we’ve eliminated the little extra mile of out and back on your way back to the bike bridge.

VIEW THE COURSE MAP  (Note: the course map has not changed since 2016!)

Marathon — Starting at the first light pole just south of the intersection of Winter and Blumrich, go south to Fulton, west to Seward, north to Leonard, east to Broadway, south to Sixth Street, east to Monroe, south to Fulton, west to Winter, south to Watson, east to Front, south to Wealthy, west to entrance to Butterworth Park (the one just east of the radio station driveway), south and all the way around the park to Butterworth. Left on Butterworth to Maynard.  South to the driveway of the (where the brown house used to be) on Maynard just north of the overpass bridge.  Right into the driveway then immediately right again onto the bike path.  Follow the path all the way around the park, back past the park entrance to the end of the overpass bridge.  Sharp right and cross the bridge.  At the first intersection, turn right and go between the lakes.  At the next intersection, veer right and follow it to the stop sign at the corner of Vets Memorial and Maynard.  Loop around the stop sign (a hard left turn) and head east on the Vets Memorial bike path.  Right at the bike bridge, right on Indian Mounds road. Veer right before the end of Indian Mounds Road toward the Riverboat and go around the tree island at the end of the Riverboat parking area. Return to the bike bridge and turn left, cross the bridge, and turn right onto bike path. At Butterworth Park, turn right and go back around the park, turn right onto the bike path along Wealthy Street, turn north onto Front Street, west on Watson, north on Winter, to FINISH LINE (same place as the start).

Some people were asking about total ascent and stuff like that. Here are a couple data items that were shared by one of our runners: 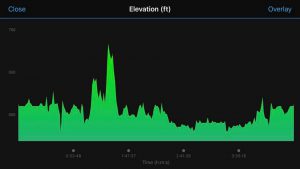 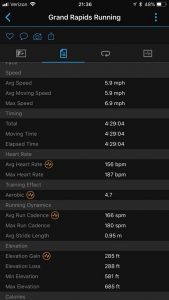